skip to main | skip to sidebar

My little girl is turning two in May. I have no idea what to do for her birthday party. Last year was Elmo themed. Here are the cake & cupcakes I made. 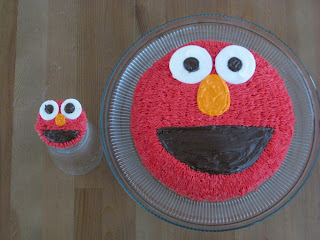 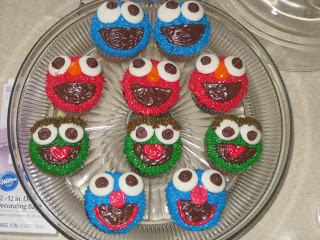 These ones looked better when I first made them. The frosting got too soft and so the eyes started to move around. At least now I know to keep things like this in the fridge!

My problem is that she isn't in to any one thing/character for more than a couple of weeks at a time. Right now she is on a Lion King kick, but that will probably be over before May gets here. She does like the Disney princesses, Ariel in particular, but she also likes Curious George. And she is really into colors right now. She loves to point out the colors she sees!

So basically I'm lacking direction and would love some input on where you all think I should go with this. Thanks!

Oh, and to get the fur look on the cupcakes I used what is called a "grass tip" and I think it is Wilton number 233. Super time consuming but way cool looking!
Posted by Ashley W. at 8:06 AM 4 comments:


I bought a cheapy cheap unfinished wood frame for $1 at Michaels and after seeing this mirror decided my picture frame could do the trick. And in the spirit of Tab-ing, I of course used a can of Tab.I just cut the top and bottom off of a soda can and the cut a slit up the side so that I had a rectangle of aluminum. Then I cut that into *roughly* 3/4 inch squares. I felt no need for perfection in this area of the project. Hot pink acrylic paint & a little (or a lot) of hot glue later and I had a masterpiece. 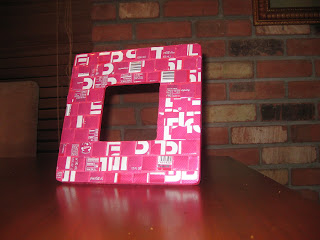 But it didn't seem right to give an empty picture frame to my cousin who just so happens to be a new dad. So after the suggestion by my little sister, we printed a picture of his son to go in it... 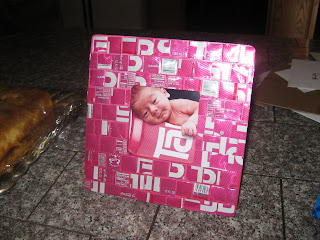 After we photoshopped him snuggling a can of Tab, of course! 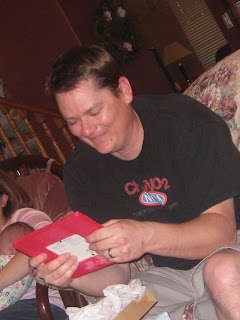 Thanks sister for the photo idea. Thanks husband for your awesome photoshop skills!
Posted by Ashley W. at 10:00 AM 2 comments:

My SIL asked me recently if I wanted a bag full of old jeans. She had purchased the jeans at Goodwill, or wherever, with the intention of making a quilt but was no longer going to be doing that. I happily took the bag of jeans and knew that even if I didn't make a quilt I would come up with some good use for them. And I did! I made this half apron for my grandma for her birthday last month. 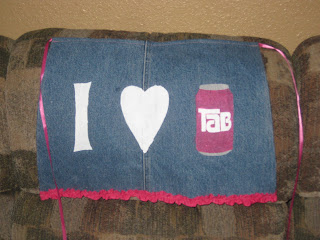 For my "stencil" I cut the "I" & the heart out of cardstock, laid it on the denim and painted with acrylic paint. I didn't do any fancy mixing with fabric medium or any of that (mostly because I'm cheap and this was a gag gift anyway). In my googling of the matter, the only downside to using straight acrylic paint on fabric is that it makes it stiff. Which it did, but not enough for me to do anything about it! For the "Tab" stencil I printed two pictures of the can of soda onto cardstock. From one I cut out where the pink went and painted that on then for the other I cut out where the silver (top & bottom of the can) & wording went. Add a Tab colored ruffle to the bottom and some ribbon to tie it and in the words of my almost 2 year old, DATAA!!! (she says tadaa backwords...it's pretty cute) 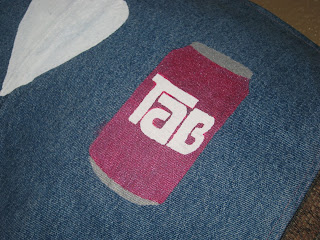 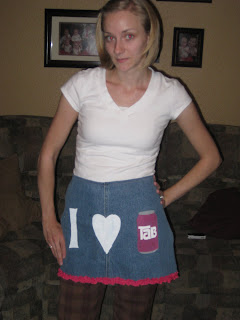 Please forgive the unedited, late at night, taken by the husband picture (yes, this was the better of the two).
Posted by Ashley W. at 7:55 PM No comments:

I'm throwing a baby shower for a friend of mine at the beginning of May. I've never hosted a baby shower before so my list of ideas is quite small. I would love your input on fun games, delicious desserts and/or cheap decorations. Other than the invitations and a few of the food items I don't have anything!!! Oh, and not sure that it makes much of a difference but she is having a girl.

For my aunt's birthday I made her some bows that she had asked me for. Given our tradition of Tab-ing people I decided at the last minute that I needed to some how *creatively* include a can of Tab in with her gift. So I turned a Tab into a bow holder! All I did was hot glue some ribbon around the outside of the soda can... 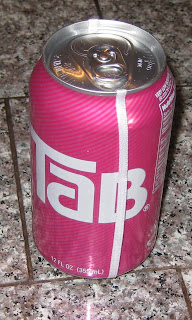 and clipped the bows to it. It doesn't hold very many bows, so it's not very practical, but I wasn't going for practicality. It made her laugh and that was the point! 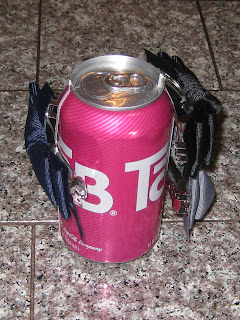 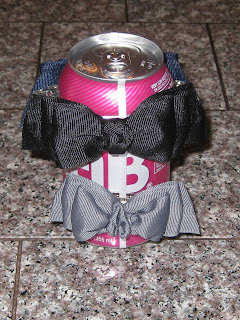 Final Mop Up & Plans for April

I didn't do a Mop-Up round up last Friday because I had planned on doing it yesterday. Well I'm a day late. But I'm happy to say that I got through 10 of the 11 projects that I had wanted to finish in March. And somehow, I don't feel relieved. Maybe it has something to do with the handful of projects I started in March and have yet to finish...haha. I guess I can't help but have at least half a dozen projects going at once!

So what was the final Mop-Up project for me? Finishing my mom's Christmas present. For Christmas I decided to put all of her old pictures in albums (that my little sister bought). So I sneakily took stacks of photos out of the box under her dresser and organized them before placing them in albums...20+ years of photos in a box this size.

I underestimated how much could fit into a box that size and ran out of albums. Ten photo albums, each with a capacity to hold 100 photos, and I needed at least three of four more. I gave her what I had finished on Christmas and told her I would finish the rest at a later date. So I spent the last few days putting away the rest of the photos. And while I realize that the pictures probably won't be viewed very often (if ever) it is nice to know that they are organized and easily accessible instead of shoved into a box in a giant mess.

Have you checked out Dollar Store Crafts lately? You should check out the April Stash Bust. I'm way excited for this. I really need to work on using supplies I already have, since my craft corner is kind of bustin' at the seams! And to go along with it there is a Stash Swap! You send something out of your stash that you have an overabundance of to another swap member and someone else will do that same to you. I've been wanting to do something like this for months, so I'm very excited!!!

So what's on my stash-busting list? Aprons using a bag of old jeans I got from my SIL and hopefully I can put a dent in my pile of things that need to be scrapbooked.
Posted by Ashley W. at 8:42 AM 1 comment:

Blogs I Check Out